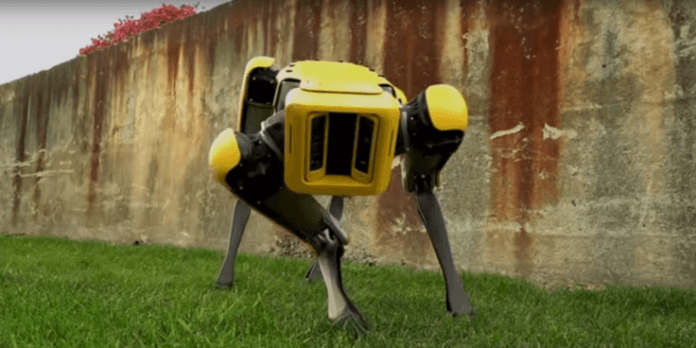 Boston Dynamics have described its new robotic dog as a nimble robot that is able to handle objects and climb stairs.

In a new video released on Monday, Robot maker Boston Dynamics has teased its new, sleeker version of the popular robot dog SpotMini. The new robotic dog is able to walk with a creepy lifelikeness. The company would not release any further details of the latest creation other than it will be coming soon.

Boston Dynamics was recently sold by Google’s parent company Alphabet and the firm was bought by Japanese telecom giant SoftBank. In 2016 the company first unveiled SpotMini, a four-legged, all-electric bot which weighed anywhere between 25 and 30kg. Boston dynamics have described to the robotic dog as a nimble robot. It has also said that the robot can handle objects and climb stairs.

The company envisioned that the electric dog will operate in offices, homes and outdoors. In the latest 24-second video, Boston Robotics shows off a new slimmer and more streamlined version of SpotMini. The dog-bot can be seen effortlessly trotting about on grass before he pauses to stare directly at the camera.

It then quickly darts its way around a corner and behind a wall. The bot is covered in a yellow plastic and is equipped with a 3D vision camera system on its exterior. Overall the new SpotMini’s movements appear more fluid than its 2016 predecessor. Boston Dynamics still has to release any specific details about its new agile creation. This includes the date for the official unveiling of the dog-bot.

And you thought the robots were just replacing our JOBS… https://t.co/1mFYo32qMn

Another detail which has yet to be released is whether the creation will be released as a retail product in the future. The company’s earlier version of SpotMini was last seen on stage in August. It made its appearance with a humanoid robot named Atlas, who took a momentous stumble off the stage during a demo.

Boston Dynamics is known for creating waves on social media with it’s various innovative yet terrifying creations released over the last few years. And, this is no exception, one follower on YouTube has stated that the latest SpotMini is the sharpest Skynet pet yet.

Founder and CEO of Boston Dynamics Marc Raibert have said he believes that robotics will be bigger than the internet one day. He was speaking at the Future Investment Initiative held in Riyadh, Saudi Arabia, in October. Raibert added that the internet only lets users reach out and touch all the information in the world.

While robotics allows users to reach out, touch and manipulate everything in the world. This means that robotics is not restricted to information. He also added that when robots can do everything a person or an animal can do they will become “incredibly” useful. Raibert hopes that robots will be able to one day take care of people. That they would be able to care for the elderly so that the task will not be left up to children.

New Idea of Color Changing Smart Tattoos could be a Revolution...

October 1, 2017
We use cookies to ensure that we give you the best experience on our website. If you continue to use this site we will assume that you are happy with it.Ok