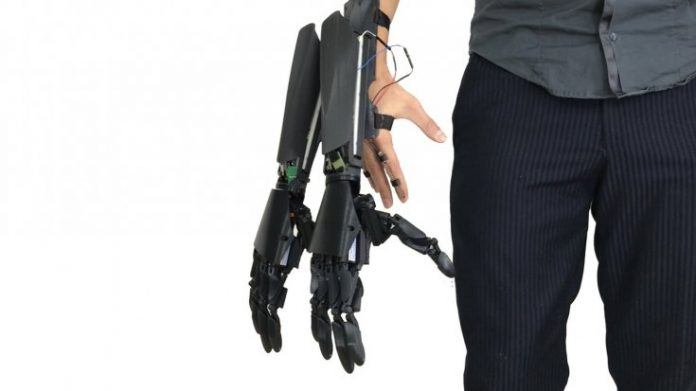 While the double-handed glove comes with a hefty price tag, it promises to make life much easier for busy people.

Italian technology designer, Federico Ciccarese who started Youbionic aims to enhance physical human capabilities way beyond what is currently possible. Local media have reported that the company previously showed off advanced prototypes but the latest in its design artillery took things to a whole new level.

Most notably is that the double-handed glove offers a key physical upgrade, which has the potential to make life a whole lot easier. It also opens endless possibilities, especially for those users who are always busy and who would like to make use of an extra pair of hands to get simple jobs done in far less time.

The device is built entirely from 3D-printed parts. It also makes use of finger-based motions to open, close, pinch, and grip objects. Movements of the glove are triggered by tiny sensors attached to the fingers of the wearer. Each hand of the robotic piece of equipment opens and closes by following related flexes of the fingers.

While the right-hand uses the motion of index and middle finger the left-hand uses the ring and little fingers. Pinching of objects also works in the same way, only with a little less speed. Currently, the working of the glove is limited to just these functions.

For users, this means that performing nimble-fingered tasks such as playing the piano or typing at high-speeds might not be possible just yet. It is, however, not very hard to imagine just how useful the glove could be especially considering the fast-paced world we’re living in.

With just a few more advancements we may soon see devices which could enhance physical capabilities, the likes of which have never been seen before. According to Youbonic’s website, the company is taking its first steps in building devices which will work by supporting the native abilities of humans to obtain extraordinary abilities.

It is believed that the tool is the first wearable robotic device which will evolve the human race into something new. Essentially the device would turn native humans into augmented humans.

But the technology does come with a hefty price tag. If you’re looking at doubling up your hand power then you are going to have to fork out £1,600 for a double-handed glove. And, £3,200 to be able to equip both arms. The device is also currently available in the company’s store.

September 27, 2017
We use cookies to ensure that we give you the best experience on our website. If you continue to use this site we will assume that you are happy with it.Ok