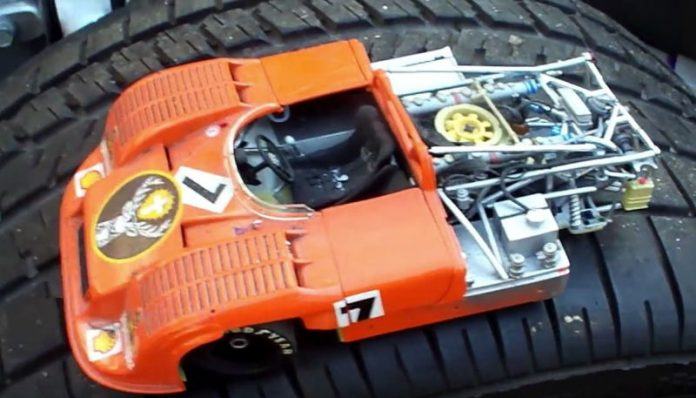 After spending a ton of money and seven years on the car, the builder has now listed the vehicle on Craigslist.

As children, many people spent their time building model cars. Very few of them actually envisioned using a 1/18th scale model to replicate the real thing. But, that is exactly what one builder of a homebrew Porsche 917/10 did. And as if building the model car was not enough he also built a fully functional replica, of the replica.

The full-scale car is equipped with a 12 cylinder engine designed by Porsche. The designer has revealed that the 12 cylinders are in fact made up of two Subaru Tribeca flat sixes. The engines are bolted together with a crank and drive a transaxle in back. And there’s more Tribeca in the hand-built Porsche, including some of the braking system.

Some car enthusiasts have said that they don’t know if it would be like peanut butter in your chocolate, however, this idea was crazy to start with. Essentially the builder of the car paid perfect homage to a classic German race car, except he did so by using parts from a Japanese people mover.

The 917 was the car Porsche used to triumph over Le Mans, giving the marque their first win at the legendary French circuit in 1970. And, the mill used was Porsche’s amazing 912 flat 12-cylinder. The air-cooled engine debuted in a 4.5-litre version and was finally punched out to 5.374-litres in the 917/30.

With the Subaru EZ mills in place, this car’s total displacement is over six liters. But, of course with the motors being Tribeca, the power won’t be anything near that of the 912. The man behind the car build has said that the car is otherwise as close to the original as he could make it, using the 1/18th-scale model as his prototype.

For the builder, this has been a long-term project, taking his approximately seven years to complete and a lot of money. Pretty much everything on the car is in place, including the Corvette Z06 suspension and a replacement of the original automatic transaxle with a five-speed manual. Happiness, however, remains annoyingly out of reach for the builder.

And, that’s because for the builder getting the two Tribeca sixes to act as one Porsche 12 has so far been infuriatingly elusive. In a video uploaded on the internet, the builder says that he may as well turn the seven-year project into a potted garden. His frustrations have led the builder to place the car on Craigslist at a price of $80,000.

For many interested buyers, the reason for the listing is more of a cry for help rather than an intent to sell. Running or not, this project represents dedication and ingenuity.

January 4, 2017
We use cookies to ensure that we give you the best experience on our website. If you continue to use this site we will assume that you are happy with it.Ok