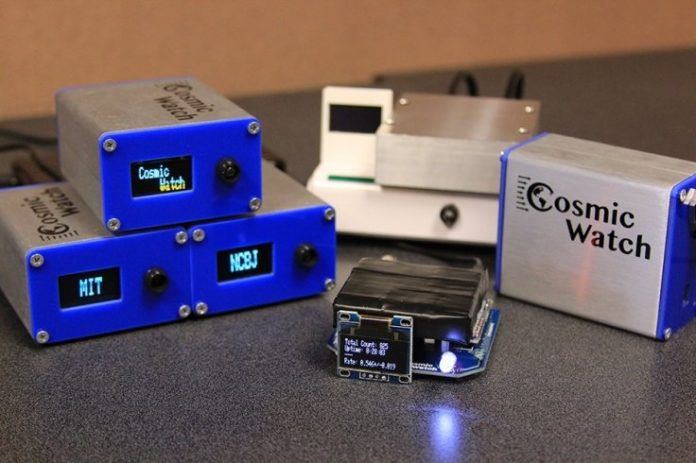 MIT Scientists this week announced that they have developed a pocket-sized device which is able to detect charged particles. These are also known as muons from outer space. Muons are created by cosmic rays from supernovae and other deep space phenomena.

These turn into charged particles when they come in contact with Earth’s atmosphere. While they only last for a fraction of a second, they are spread like a light drizzle in the atmosphere around us. Some of these particles even touch the Earth’s surface and penetrate into it.

They are known to pass through rocks and ice. While typical muon detectors are large and bulky, the one designed by MIT is small. Called the CosmicWatch, it requires little power and uses ordinary electrical parts. Not only can the device catch these particles in virtually any environment, it is also very affordable too, costing around $100.

CosmicWatch lights up and counts particles passing through it, once it is turned on. The researchers behind the watch have listed its parts along with a step-by-step instruction guide to build the instrument on its website. They have also said that first-timers could get it up and running in just four hours.

Those with experience should be able to set the device up in less than one hour. The team, which is led by MIT graduate Spencer Axani, designed the gadget as an add-on to enhance the sensitivity of IceCube, a large particle detector buried far underground in the South Pole. IceCube’s job is to sense subatomic particles called neutrinos.

The new small device will aid its search by allowing scientists to tag the precise position of muons. They will then be able to sift out those particles to look for neutrinos. To date, the team has supplied as many as 100 detectors to high-school and college students.

The students then sent the instruments up on planes and air balloons to measure muon rates at high altitudes. They have also taken the device underground and measured how the particle count varied. According to Axani, researchers have seen that the particle count at sea level greatly differs from the count when the device is attached to plane.

He added that from the measured rate one could back-calculate what the actual altitude of the plane was. Now, a team at Boston University plans to send one of these devices to 100,000ft on a suborbital rocket.

However, the eventual goal for Axani and his team is to use these detectors for muon tomography – the method which creates 3D images of matter surrounding a detector using the sharing of muons. This method has earlier used to uncover hidden structures.

Microsoft Surface Pro 3 Will See its last by the End...

Uber to dump Google Maps with a $500 Million Alternative

July 31, 2016
We use cookies to ensure that we give you the best experience on our website. If you continue to use this site we will assume that you are happy with it.Ok