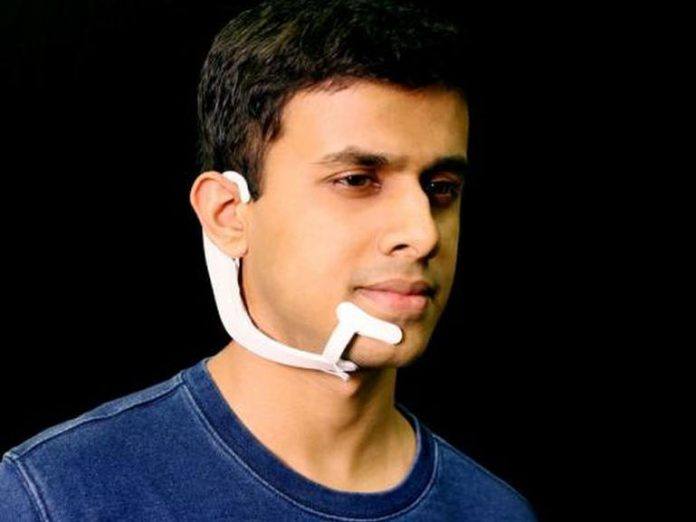 Researchers at the Massachusetts Institute of Technology have developed AlterEgo, a headset programmed to detect and interpret neuroelectric signals transmitted when internal speech happens. Its developers hope that this new piece of technology will enhance interactions with smart devices, and furthermore that it will ease work in loud environments.

MIT’s new gadget is a closed-loop system that the user puts on one ear. It follows the jawline and rests on the chin and it is non-intrusive. The bone-conducting earpiece allows communication to and from, and streams of data with smart devices, as it transmits vibrations directly to the inner ear. This so-called “aural output” from the earpiece does not obstruct the user’s hearing.

Think instead of talking

AlterEgo’s researchers have released a demonstrative video that showcases some of the device’s capabilities, as well as some situations of its intended usage. With simple commands, the user can communicate with and instruct “Internet of Things” electronics, such as a smart TV. The device is also able to make on-the-fly calculations, ranging from additions during a shopping spree, to strategizing optimal moves during a chess game.

So far, the devices command recognition rate is at 92%, meaning there is very little chance it will misinterpret the neuromuscular signals.

The developers of AlterEgo were hoping to simplify interactions between people and computers and to help establish a stronger connection between them. Its lead developer and the graduate of MIT’s Media Lab Arnav Kaput calls the device an “intelligence-augmentor.” He states that his goal was to make computers feel like more of an extension of human thinking.

The headset can help avoid most of the hassle of interacting with smart devices, thus making these interactions more streamlined. For example, AlterEgo users could simply issue a series of commands to their phone, instead of getting their phone out, unlocking it, opening an app, then performing the task. AlterEgo would make it possible to order a Lyft or Uber ride home, set up events on a calendar, and much more.

Interactions with smart home devices could also be simplified. AlterEgo could completely eradicate the privacy issues of being overheard by other people when communicating with Alexa, Google Home, or other AI. Indeed, these devices would no longer need to constantly listen for human voices at all.

Professor Thad Starner from the College of Computing at Georgia tech proposes that this piece of technology would also be useful for workers in very noisy environments. In areas with lots of machinery, such as factories or power plants, with AlterEgo there would be no strain to talk over the noise.

At airports and in the military where communication is vital, AlterEgo could also prove to be an irreplaceable asset. This new gadget would enable communication in situations where it was not an option.

Unveiling The Bugs and Robot Snakes that will Get Your Engine...

Stanford University’s Artificial Intelligence Can Predict With 90% Accuracy When Terminally...

January 22, 2018
We use cookies to ensure that we give you the best experience on our website. If you continue to use this site we will assume that you are happy with it.Ok