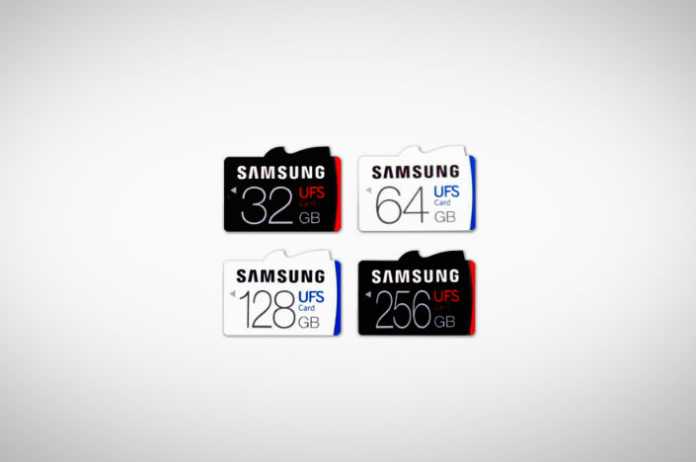 SD cards have come a long way. Back in the day they were just one of a couple memory card formats used, fighting for domination with MMC and MS (Memory Stick) cards made by Sony. We all know how that fight ended. Similar to the optical storage war between Blu Ray and HD DVD, where Blu Ray won and stayed the only next generation optical storage format, SD cards won and became the most popular memory card format, now used in a plethora of devices. Micro SD cards were a logical evolution of regular SD cards. Smaller, providing more and more storage with every passing year, along with increased writing speeds, SDXC (Secure Digital Extended Capacity) cards can now offer up to 2 TB of storage (at least in theory) and writing speeds of up to 100 MB/s. Despite the fact that SD cards are now the main type of expandable storage used in mobile devices, Samsung thinks it is time to move on.

Korean giant thinks it is time to move on, to get ready for the next generation of memory cards, which are capable of insane writing and read speeds, along with a solid max capacity. Meet UFS (Universal Flash Storage) memory cards, the future of expandable storage, made by Samsung. When talking about capacity, there aren’t any surprises. UHS memory cards offer capacities of either 32, 64, 128, or 256 gigabytes; while there are no 512 GB or 1 TB options, we think that 98 percent of users just don’t have the need for anything more than 256 gigabytes. You can put around 25 thousand songs, more than 100 HD movies, a ton of games, or tens of thousands of photos on the card with a capacity of 256 GB. Almost no one will actually put that amount of data on a card, so max size of 256 GB is more than enough, at least for now.

While storage capacity is solid, performance speeds of UFS memory cards are impressive, and will knock down any SD card. Sequential read speeds of UFS cards can go up to 530 megabytes. For any of you wondering, that’s five times faster than the fastest microSD cards. Reading a file that’s 10 gigabytes big can be done in just 20 seconds, while on microSD that same file would take 100 seconds to read. Impressive, right?

Write speeds are also much faster than of SD cards. Max write speed is around 170 MB/s, and as we said before, max write speed of the fastest microSD card is 100 MB/s. But that’s the speed of SD cards for professionals; usual, everyday microSD cards have a write speed that’s around seven times slower, making write speed of UFS memory cards to look even faster. Samsung explains that there’s more and more high resolution footage generated by various devices (smartphones, drones, action cameras, etc.) that can use the power of UFS cards. And while design looks very similar to the one of microSD cards, pin layout on the back is not compatible with the most popular format of expandable storage.

We don’t know anything about the price, and possible release date, but it is clear that Samsung will be the first company to use this new storage format. Will they start supporting UFS cards with the new Galaxy Note or next year’s Galaxy S is unknown. All we can do at the moment is to wait.

August 23, 2016
We use cookies to ensure that we give you the best experience on our website. If you continue to use this site we will assume that you are happy with it.Ok