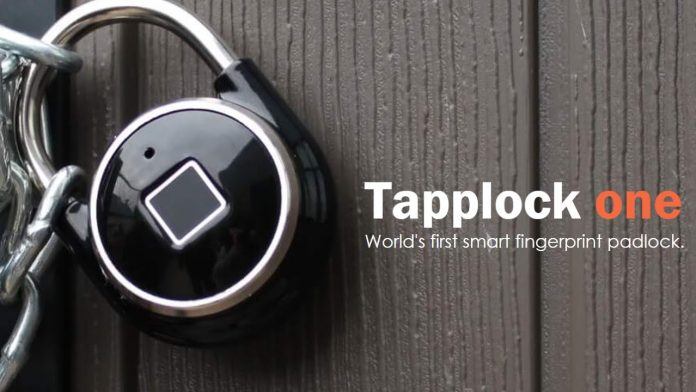 Apple’s Touch ID was a giant leap for mobile security.  The Tapplock One offers the same convenience for the padlock industry.  Now available, the Tapplock One, borne from a crowdfunding campaign on Indiegogo in 2016, features a fingerprint sensor to unlock as well as an app with a backup unlock function via Bluetooth.

Being a padlock, that will often be used outside, the Tapplock One can withstand temperatures between 14 F and 140 F and after one charge, the battery lasts for up to 12 months.

One of the unique advantages the Tapplock One offers is the unlock versatility. You are not limited to using your fingerprint and Bluetooth to unlock it. You also have the choice to use the “Morse-Code” backup function. By pressing the power button with a pattern of long-and-short presses, it also unlocks. Irrespective of the failure scenario, Tapplock One will open up – as long as the battery still functions.

Want to open it for a visitor while you are far away, and this is also no problem. Simply allow them to use their device using Bluetooth. This is perfect for those sharing access to a shed, storage unit or an Airbnb guest. Or even your relatives that arrived at your home to stay over while you’re away.

If you get hold of the Tapplock and handle it, it feels like quality. It is solid, well-made, and tested very well through seasonal elements outside, be it sun or snow and ice. And even in the elements outside, the fingerprint reader in the center of the lock functioned without fault, every time.

The Tapplock One’s charger gives you durability and longevity, but the Achilles-heel of this product is the fact that you need to recharge the lock with its proprietary cable.  Finding this cable once a year to recharge the lock, might be really difficult for many users.

At the U $99 the Tapplock is more expensive than any traditional lock, but it remains affordable. It rates high on convenience and in the long run, it won’t join the collection of locks abandoned due to lost keys and forgotten combinations.

July 20, 2018
We use cookies to ensure that we give you the best experience on our website. If you continue to use this site we will assume that you are happy with it.Ok