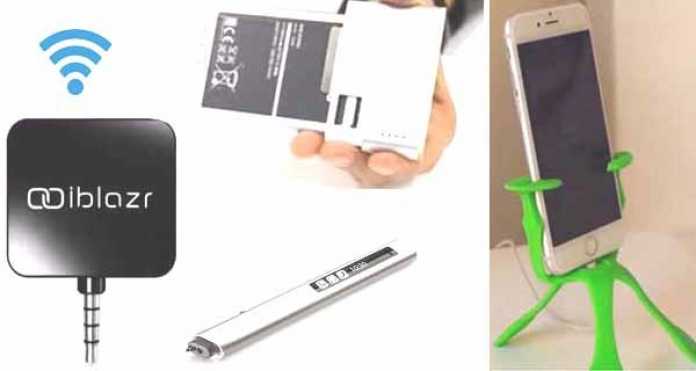 Looking for some awesome top accessories for your mobile phone? We have got some pretty awesome accessory collections, just scroll through the list and take what you like.

Designed for high-end mobile phones like iPhone 6 and Galaxy S6, Nikola’s wireless charger is a smart case that literally downloads the power from the air and uses it to charge your mobile phones. Smartcase (not the official name, but since there is none yet) has changed the way smartphones are powered. It harnesses the radio wave energy from a cellular tower and converts it to electronic power, which is transmitted to your smartphone through its smart case. This significantly prolongs the battery life of your phone’s battery.

So if you are in the city or even at the outskirts, as long as your mobile phone is in the range of a cellular tower, it will never run out of battery and continue to charge. This new technology uses the signals which are wasted away in the environment, because your mobile absorbs a very small amount of radio waves, but with the help of specialized circuit on Smartcase, it absorbs a greater amount of energy and feeds it off to your smartphone.

A smartphone accessory is actually absorbing cellular signals, some might think that it would interfere with quality of signals on mobile phones. That is not the case; Smartcase has been tested. As to its efficiency, we are still in the dark just as you are because according to the company, it will extend the battery life of your phones from sunup to sundown, without a mention of a percentage or a number to help us assess its efficiency.

IBlazer allows you to take beautiful pictures with the help of a simple LED accessory that jacks into your smartphone. The modern smartphones do have good LEDs for quick snaps, but for best results, you would need a better, brighter flashlight. IBlazer is the first of its kind external LED flashlight for mobile devices that are fully synchronized with smartphone and tablet cameras.

IBlazer not only gives you great quality pictures, it also removes the red-eye effect that is very difficult to get rid off. Fitted inside the smart square accessory are 4 high-end LEDs that produce an uncompromised amount of light through its highly transparent sixty-degree optic lens. You must be thinking, with so much power, it will easily drain your battery. Well, it has its own battery too.

It also means you don’t have to use your smartphone’s built-in flashlight, why should you anyway when you get 10 times brighter light than the standard iPhone’s LED does in video mode, so it saves your battery as well. It comes with a nice app that synchronizes the external flashlight with phone’s camera shutter. It can also be used with the tablets through its headphone jack. Skype chat becomes much better in the dark when you have IBlazer at your disposal.

People change their smartphones within two years but even after two years, their batteries still have 80% of their original efficiency, which is a lot. But instead of recycling old batteries, external power banks are used which are increasingly harming our environment. There has to be a much more valuable solution, and Better Re is just that.

Better Re is a smart accessory that clips in old mobile phone batteries, which can then be recharged and reused  to power up anything you want. It doesn’t matter how big or small is your battery, simply open your Better Re and click your battery in place when you need a battery boost. Keep multiple batteries, take them with you on the travel and enjoy extra environmentally friendly battery life.

You can use Better Re to recharge your smartphone and laptop, anytime, anywhere. It is like your own personal expansion pack. How did this curtail environmental pollution? Apart from good design, its body uses eco-friendly materials, including 100 percent recyclable aluminum, FSC-certified walnut, and maple wood. Also, look at how many batteries you will be able to recycle with Better Re.

Gecko is an accessory that mounts your smartphone on complicated things so you can take a perfect photo or video. You can use the accessory attachment as a stand to watch videos, movies or Skype chat. It can easily cling to branches or any other complex anchor. So you would never again need to ask a stranger to take your family photos.

It can turn your mobile phone into a GoPro camera, simply wind it around the handles of your cycle, wrap it around your wrist or arms or fix it on your helmet. Gecko has a very warm and eye-catching design. If not in use, you can make many shapes out of it and use it as a showpiece. There isn’t really much to say about Gecko, you just see it and you know you want it.

Smartphones are doing a great job with performance, camera, functionalities and everything but something is still missing, and that is precision. Turns out, it is not the job of your smartphones because they will always be touchscreens. So you either have your finger or a stylus. Stylus has that precision, but your canvas is still limited. Phree says, don’t be limited, turn the entire world into your paper.

Phree is an external stylus (styloid: not true stylus because it doesn’t write on the touchscreen) which not only gives you better precision but more space as well, in addition to many other valuable functions. You can draw and write on nearly any surface and watch the magic happen on your smartphone or tablet screen. Based on optical tracking engine and a parking sensor, it can also recognize your handwriting and serve as a password as well.

These top 5 mobile accessories are sure to make your life very convenient if you wish to live bigger than just your smartphone.

NASA Starshade: We Come in Peace

Use of Information Technology in Competitive Advantage