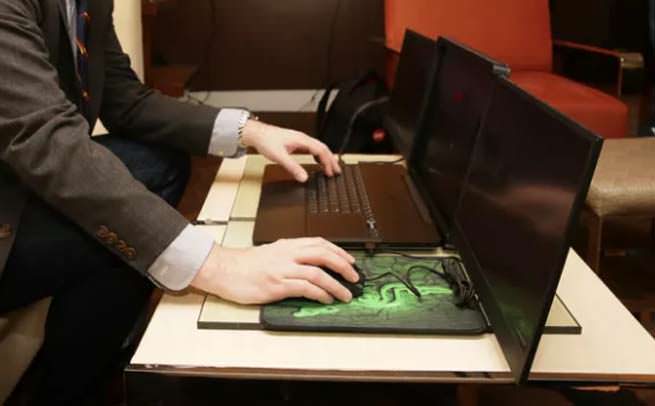 Razer’s Project Valerie is a 3-screen laptop for gaming. As technology is advancing, the year 2017 has become an open season for crazy ideas. So let’s review how adding two extra screens to a notebook can improve the gaming experience.

Razer revealed Project Valerie during the CES 2017 and ever since it has been a hyped fantasy and subject of controversies. We will talk about that in the detail later.

In the previews, we see the extra usage of the in two different modes. One is the continuous mode in which all the screens combine to act as a single wide screen.

The second mode is in which all the screen displays the same thing just like a separate monitor. There are rumors that the final version may bear an option to fold the displays backward. If that happened, the final version of Razers Project Valerie will greatly benefit PowerPoint presentations or power users of Microsoft Office.

An “automatic deployment mechanism” slides the screen out of the main screen when the lid is opened/lifted.

You have to admit that Razer’s Project Valerie is a cutting-edge modification to notebooks you know and love. The tech company has always been dedicated towards design of their products. Making a 3-screen laptop was a risky move.

“At Razer, we play hard and we play fair.” ~Razer CEO

A risky move but cool as well because it appears like a hawk when its wings (side/lateral screens) are unfolded.

Let’s start with 3-headed hydra or snake logo that light up the neon aura that gamers like. When all the lids shut and the notebook is closed, it appears massive and thick. The central screens feels thicker, but all the screens are nearly equal in slimness. The central one has to adjust for the packing. From the corners of central screen, mechanic arms emerge to support the lateral screens and balance their weight.

“The greatest amount of screen real estate ever assembled in a single computer.” ~Razer

When observed from the front, Razer’s Project Valerie has distinct gap between the laptop screens. Now we know it’s already huge so the notebook-maker utilized the main body by putting a large trackpad at the right corner. The backlit keyboard is huge and yet is not able to cover the surface area entirely, leaving more space empty than the occupied. It certainly does make the power button sitting at the center feel like the king. In future, it could be used to add more multimedia or gaming controls, potentially.

Technological advancement is making laptops lighter but experimental ventures are not bound to this rule. Most modern notebooks weigh 3-lbs or less but gaming laptops tend to be heavier because of the more powerful hardware and cooling systems for its maintenance.

In the case of 3-screen Razer laptop, the 12-lbs or 5.4-kg can be attributed mostly to the accessory displays. The prototype design has a unibody CNC aluminum body measuring 1.5-inches thick.

Project Valerie also includes “Ultra-Low-Profile” mechanical switches, making key presses a slightly forceful experience. So the feeling is going to be different from soft laptop keys you are used to. The company says the keys have been adjusted to 65 grams of force, which is equivalent to old and bold IBM keyboards.

The massive laptop comes with its own thermal management system with custom-designed fan and dynamic heat exchangers paired with a vapor chamber to maximize heat dissipation. All that packed into a thick aluminum casing.

The gaming laptop mock-up features Nvidia GeForce GTX 1080 graphics card: the quality standard in gaming laptops. It comes with Nvidia G-sync technology, which matches the screen refresh rate and the output of the graphics hardware.

Project Valerie’s launch date and the rice is still unconfirmed. So what we did here was more a ‘preview’ than a review but we had to do it because the internet is crazy about it. It is a near-perfect concept laptop for gaming and the prototype is still in development.

Razer did not release any information about the consumer model of the laptop or its release date. Keep in mind it may never see the face of the market at all, the prototypes has no guarantee. If it happened, it will be the first of its kind portable laptop with three built-in monitors.”

Razer’s Project Valerie is a radical center of attention from the mainstream media. Due to its stunning design idea, two of the Valerie Prototype laptops were stolen from the CES 2017 and CEO of the company had put a $25k reward for tracking the culprits. So it’s been the center of the controversies, another standpoint being ‘company did it for publicity.’

Is “The Cloud” Secure for Business Hosting?

December 2, 2014
We use cookies to ensure that we give you the best experience on our website. If you continue to use this site we will assume that you are happy with it.Ok