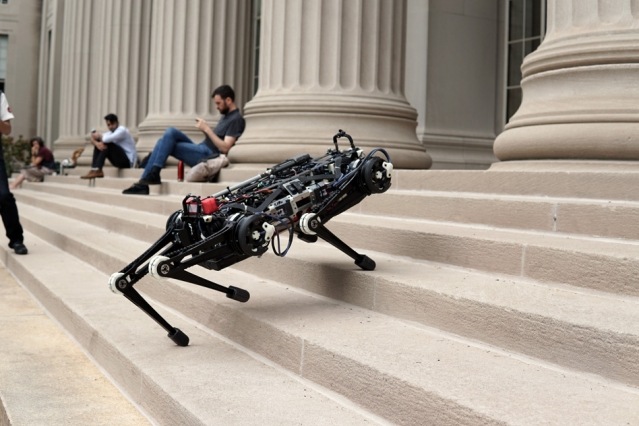 Cheetah 3, a new, lightweight robot from MIT showed its outstanding set of skills and rendered everyone presents speechless. The skills include, but are not limited to: slow and fast trot, outdoor movement, spin moves and gallop. However, the most impressive feature of Cheetah 3 is probably connected to its blind climbing.

He doesn’t see the stairs, it has no built-in camera nor any previous information about the stairs. However, it remembers them very quickly and never makes the same mistakes. A successful slow jump onto a desk (76 cm) is also pretty impressive.

Cheetah 3 is truly a fantastic 90-pound piece of work that tackles all the obstacles that are in its way, trying to ease its own situation as much as possible. It would be nice if some people would take some of its attitudes to always face their problems and obstacles, no matter how difficult they are (and, they are indeed difficult for Cheetah 3, even though it does not show that).

New algorithm and touch navigation as the main features

This robot comes with a new algorithm which enables it to use the touch in order to navigate. The designers thought of this by observing insects, who have the same ability to navigate the environment by using their touch.

Remember that people deprived of their eye vision develop much more strength in their other senses over the years? When you think about this, it doesn’t seem so peculiar for a blind robot to have more intensely sharpened senses, does it? With this special ability concept being their inspiration, the designers thought of this new algorithm.

Even though a robot climbing the stairs is not exactly a fresh idea (it was first conceived by Boston Dynamics, and was called SpotMini), but it is certainly the first one which does so without any accompanying equipment like a camera (which SpotMini used to avoid the obstacles and move).

When it comes to Cheetah 3, the basic idea of the team working on it was not counting on its vision too much. It could impede its overall speed, and its designer Sangbae Kim has an interesting question – what if it encounters something that a camera can’t see? What will it do then? This mechanical engineering professor at MIT justly said that the blind locomotion can help.

What is the ultimate purpose of Cheetah 3

In short, the purpose of Cheetah 3 is to replace a man when and if necessary, for it is a fact that there are facilities and spaces where a man cannot function. It can inspect or work in deep power plants. MIT engineers don’t have any doubts that “Dangerous, dirty, and difficult work can be done much more safely through remotely controlled robots”.

That was the idea behind using algorithms. The upgrades include (but are not limited to) changes that let it twist and stretch. Earlier generations broke speed records and cleared two-feet-tall hurdles. However, it is nothing compared to this new beauty.

FitBit Charge Wristband is a Smart and Savvy Fitness Tracker

Swiss Hospitals will Use Drones to Deliver Medical Supplies by the...

September 23, 2017
We use cookies to ensure that we give you the best experience on our website. If you continue to use this site we will assume that you are happy with it.Ok