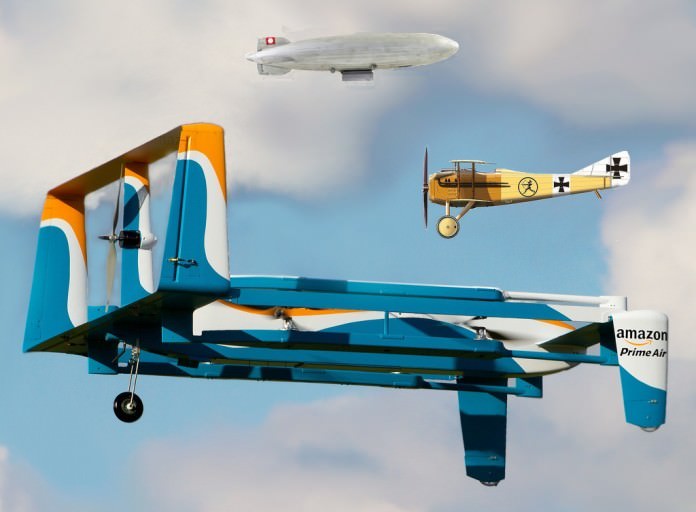 The long expected Amazon delivery drones that first made their appearance in England during December of the last year have finally come to America.

In Palm Springs, California, during the Amazon’s MARS 2017 conference, everyone was surprised by an unexpected guest – the Amazon’s delivery drone. The drone has delivered a convenient package – a box of sunscreen, necessary in the warm California weather.

For the first time in well over a year, since the commercial peaks of the drone had started, we’ve gotten an amateur video of this type of drones capabilities, in contrast to regular Amazon’s videos that we’ve seen so far.

The video, shot by founder and CEO of August Home, Jason Johnson, who was one of the attendees at the MARS 2017 debut, had shown that the drone testing in the U.S., Britain and other countries that are working on this project is going well.

In Jason’s video, we can witness for ourselves the progress that the drone has made. The drone flies in the resort gently touches the ground and drops off its delivery before flying away.

Christine Corbett Moran, one of Caltech researchers, and also one of the debut’s attendees reported that the delivered package contained a sunscreen – a perfect gift for the sunny Palm Springs day.

Corbet Moran, the finalist for NASA’s astronaut candidate class, and one of the few people who got the chance to sit in the pilot seat of Method-2 robot, (the day after Jeff Bezos, the founder of Amazon, himself rode it), also took a walk on a virtual Mars during the MARS 2017 event.

This demonstration proved to attendees, as well as everyone else who’s seen the video that the Amazon’s making progress in the Prime Air development project. They still have a way to go, since it’s expected that the packages delivered via drones will arrive in 30 minutes or less, once the development is finished. That means that the drones will be able to fly up to 50mph, but this perk comes at the cost, which is a loud buzzing noise that we witnessed in the video.

Amazon’s demonstration of how far the drones have come at this debut comes as no surprise since they’re soon presenting the secret meeting to show off the newest technologies and scientific breakthroughs – for a select audience only, of course.

If you’re interested in following this and similar technological breakthroughs that are bound to happen in the near future, you can always follow the #MARS2017 hashtag on Twitter.

August 23, 2016
We use cookies to ensure that we give you the best experience on our website. If you continue to use this site we will assume that you are happy with it.Ok