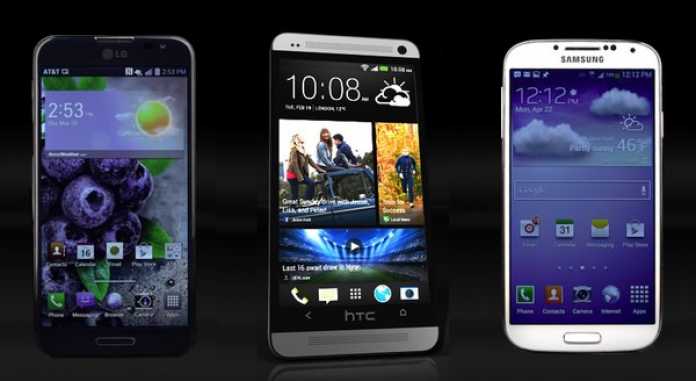 Every year, smartphones have gotten better and better, and this year they have evolved to mobile powerhouses capable of running multiple apps, games and programs simultaneously either in the background or all at once on the screen. Some are successful because of their hardware, and others are great because of their ergonomic build quality, but all of the phones in this article share one thing in common- they are all the best phones of 2013.

Despite being released almost a year ago, the Nexus 4 is still a great contender in 2013. The reason behind this? The Nexus 4 has great hardware capable of rivaling the Galaxy S3 from last year (which is still incredibly powerful) and it can be purchased for a rock bottom price.

Thanks to the support from Google, the Nexus 4 is cheaper than mid-range devices like the Galaxy S4 Mini or the HTC One Mini, yet it has hardware worth the same price as a high end handset.

The Nexus 4 also runs stock Android, usually a preferred choice for many Android enthusiasts because of its buttery smooth performance and minimal OS.
The Nexus 4 has a 4.7 inch 768×1280 IPS LCD display, a 2100mAh battery, a Snapdragon S4 Pro SoC with quad core 1.5GHz Krait processor and Adreno 320 GPU, along with 2GB RAM and 8GB to 16GB internal storage depending on model variant.
The device has an 8 megapixel main camera but doesn’t have LTE capability.

The Galaxy S4 is the culmination of the TouchWiz experience- it is a hardware-heavy phone packed with tons of software features that no other smartphone, apart from Samsung’s, can offer. Some make the argument that a lot of the features on the Galaxy S4 will hardly ever be used by most users, but there’s no doubt that somewhere on the phone you will find features exclusive to Galaxy handsets that you will most likely use every day.

The great hardware on the phone is important because like mentioned above, ever since the Galaxy S2, Galaxy handsets have always been very software orientated phones, and because of this, it can often be a laggy experience for cheaper Galaxy devices because they lack the processing power to run the bundled up software.
The Galaxy S4 has a 5 inch 1080×1920 Super AMOLED display, a 2600mAh battery, a Snapdragon 600 SoC with quad core 1.9GHz Krait 300 processor and Adreno 320 GPU, along with 2GB RAM and 16GB to 32GB internal storage depending on model variant.

Thanks to the success of the LG-made Nexus 4, the LG G2 has been given a lot of attention, and that can only be a good thing because the LG G2 is an impressive device. LG has tried tremendously hard to rival Samsung over the past few years, and getting better and better at it.

The LG G2 is a great handset with great hardware capable of rivaling that of the Samsung Galaxy S4. Because LG have taken a different, more subtle approach to the software on their handsets, the LG G2 makes for a decent alternative for those that don’t like the Samsung TouchWix UX experience.

Perhaps LG lack enough originality at this stage, but that doesn’t take away from the fact that they are getting better at making good quality smartphones.

HTC has been considered the underdog this year in the Android scene, and despite selling no way near as many units as Samsung’s Galaxy range, many smartphone critics are hailing the HTC One as 2013’s best smartphone.

HTC have taken their Sense overlay to the next level and offered an experience that is easy to delve into, unlike Samsung’s TouchWiz, and it’s filled with useful features for a quick, speedy and minimal user experience.

It looks gorgeous, fits comfortably in the hand, and manages to stand out from the rather dull crowd of other smartphones that are constantly going for thinner and slimmer smartphone designs without taking into consideration the user experience when held in the hand.HTC have always been appreciated for their strides towards manufacturing ergonomic smartphones, and the HTC One is a perfect example of this.

The device has a 4 Ultrapixel main camera and LTE capability.

If you were to take the Galaxy S4, stretch it out a little, throw in some better hardware, and give it even more software features, just because you can, you’d probably end up with something similar to the Galaxy Note 3.

The Galaxy Note 3 has a very impressive large HD display, perfect for viewing media, playing music and watching videos on. The device has been made in a way that even though it is so large, it is still capable of being held in one hand. And thanks to one of the great software features on the phone, one-handed use is possible.

Just like previous Galaxy Note renditions, the Galaxy Note 3 has S Pen functionality. A small stylus can be found slid into every Galaxy Note 3 and can be used alongside many new S Pen apps and software features. This is a nice addition to a phone that can often make use a little uncomfortable due to it’s size.

Apple Unveils iPhone 7 and iPhone 7 Plus, their Release Date...

More iPhones to be Build in India by Wistron

March 14, 2018
We use cookies to ensure that we give you the best experience on our website. If you continue to use this site we will assume that you are happy with it.Ok