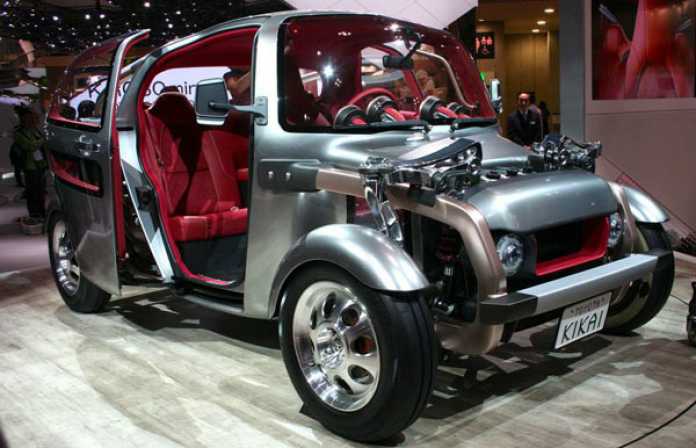 Stately car events around the world attract exotic car designs from world-renowned automakers; Tokyo in this regard is a unique destination because the car companies forward their craziest concepts and prototypes. Where other automotive exhibitions are more about practicality and sales, Tokyo Motor Show encourages car makers to share their ideas, without calling a judgment.

Tokyo Motor Show takes place twice a year and predominately features the cars from Japanese automakers. Keep in mind that not all the unlike Toyota, Lexus, Scion and Honda, some Japanese automakers are not meant for American and European markets; these vehicles are built for domestic roads only. So when you see these outlandish concept cars, don’t get startled because Japanese are playful people.

With that told, here are the top 10 most outlandish concept cars from 2015 Tokyo Motor Show

Why is Toyota Kikai the most outlandish concept car? Simply, because it is the marriage of art and engineering. Toyota thinks that the modern cars are aesthetically undone and people should appreciate the marvel of engineering which is concealed beneath the metallic sheet of a car’s monocoque. Externally, the stunning Kikai is exotic enough, but actually surprise is inside the cabin, where the floor is transparent and the passengers can see the suspension arms, fuel tank, exhaust pipes and an engine. The cabin unusually features only three seats; one for the driver on the front and two rear seats for the passengers.

Toyota is so far the only automaker making an extensive investment in hydrogen fuel cell technology. Although, a complete working model has not been manufactured, but the company continues its effort and Toyota FCV Plus is an example. According to the Japanese automaker, FCV Plus could be used as an electrical generator, creating electricity from an external hydrogen source to create power either at home or while traveling. Although, the dream of Hydrogen fuel cell is a far cry, but in the world of hydrogen powered tomorrow, Toyota will always be cherished as the fountainhead of the mission.

Might Deck was really something to look at during the 2015 Tokyo Motor Show. The concept car made Suzuki fans proud of its brand because Suzuki is not an eager car exporter to Europe and its amazing vehicles have been pushed out of the loop. Although, this wasn’t the only concept car by the company on the show, but the Mighty Deck dimmed the glimmer of others. It is inspired from 1980’s Mighty Boy commercial’s vehicle, and features cramped kei-class dimensions, 2+2 seating in a centralized cabin and a longitudinal length of just 3.395-meters.

At first glance, Air Triser gives you an impression of a traveling restaurant. If you still didn’t get it, the point is luxury all the way. Suzuki has designed it to look look smart, commodious and externally stylish as well. Under the hood is a 1.4-litre 4-cylinder engine, which along with its electric motor, delivers the power to all the wheels via a 5-speed automatic transmission system. Measuring a total 4.2 meters along its length, Suzuki Air Triser concept is a bit too bulky for Japan’s likeness where kei-class cars rule.

Back to back with Air Triser is Nissan’s imagination of a wild boxy ride. Wearing all-white, the outlines and exterior design of Teatro is completely breathtaking. It is covered with digital displays inside out, which makes it look like a mobile phone. The mid-section of the vehicle lacks B-pillar and all the four doors open in opposite directions, which gives the passengers a very welcoming feeling. The distinct feature of Nissan Teatro concept is its all-digital cabin space where seats, doors, and instrument dash covered in digital screens. Nissan calls this interior decoration a “future canvas,’” which is truly outlandish, not to mention, it lack typical door knobs and handles on both sides of the doors.

Is this a car? Is this a stand? It is Honda’s new Wander Stand. It appears like a mobile telephone-booth and possesses tall front windshield, concealed tires and a comfort zone for only two passengers. Other eye-catching elements include head-up display (HUD) with functions as navigation and smartphone activities (like text messaging). In short, Wander stand is the right fit for you if you want to get some air around the block; however, it is not built for the highways.

If Daihatsu Tempo ‘tempted’ a huge crowd and caught a lot of attention, it wasn’t without a good reason… free food! Daihatsu promoted its concept by offering free food to the general visitors and automotive journalists, thus getting greater coverage in return. Tempo concept is actually a food truck, which showcased a decorated interior with manageable shelves and counters for food. Note that Japan is home to food truck entrepreneurs and small food businesses run on the family level. This beautiful piece has a great potential to sell in their domestic market.

Nori Ori in Japanese means “get on, get off.” This is another manifestation of Japanese’s idea of luxury and quietness. The box-shaped Daihatsu Nori Ori concept is boasting bright green colors on the accents and doors, which contrast to the background’s white color. The schematic green theme is also depicted in the design of its interior. The floor rests very low, while two doors open from the left side in opposite direct, no B-pillar, while a single rear door for backside entry or perhaps luggage has also been provisioned. This vehicle designed to mainly serve as a transport shuttle within universities, hospitals, community centers and similar places.

As we are moving down the list, we are getting closer from conceptuality to reality and here comes another beautiful piece of a luxury minivan that is very doable. Daihatsu Hinata’s shape is not out of the world, but the way designers have set up the contrast of yellow and white is admirable. No B-pillar, all the doors open in opposite directions, smart cabin with light cargo space in the rear that is continuous with cabin space. Now these types of kei-class minivans are very popular in Japan, but this particular model could really do well in foreign markets as well. By the way, Hinata means ‘suicide’ and we have no idea why they would give such a vicious name to such a cute looking boxy.

The last on the list also most practical, but since its body profile, dynamic accents and curves are in fact eccentric, it had to be on the list. The D-Base concept 4-door hatchback is actually the next-generation Mira, which is Daihatsu’s ultimate contribution to kei-class cars in the Japanese market. The D-Base concept belongs to the subcompact category and features a ravishing exterior with sports-style wheels and monocoque while an equally enjoyable interior; including bucket seating system, modernized dashboard and sport upholstery design make the car perfect replacement for the likes of Scion iQ city.

Evs Might be Cheaper than Gas-Powered Cars by 2030, Claim Experts

May 25, 2017
We use cookies to ensure that we give you the best experience on our website. If you continue to use this site we will assume that you are happy with it.Ok